Spelling was not as fixed in the eighteenth century, at least not in America. The great days of dictionary writing and spelling reform were just ahead. However, this group was mostly a highly educated one and what you see in these documents are spelling inconsistencies.

As an example, Edmund Randolph changed the spelling "chuse" to "choose" when he proofread the printed copy of the Committee of Detail's draft. But the "chuse" spelling was also used in the document.

There were more spelling inconsistencies in the many printed copies that followed the close of the Convention.

Broadsides were public announcements or notices, printed on one side of a sheet of paper.

-- To write in large letters; to write out or express in legal form.

-- Written in a fine round hand.

"Errors in the Constitution -- Typographical and Congressional." By Henry Bain. In Prologue: The Journal of the National Archives, Vol. 44, No. 2 (Fall 2012).

-- In that time important documents were "fairly engrossed on parchment." [Jacob Shallus] wrote a very legible script with titles that were engrossed--that is, made larger and darker.

"Jacob Shallus (1750 – 1796) Engrosser of the Constitution of the United States." By Dr. Joseph M. Vitolo. History of penmanship. https://www.calligraphersguild.org/penmen.html

– a part of language study that deals with letters and spelling

"In order to form". (n.d.) Retrieved August 4, 2016 from https://www.republicoftheunitedstates.org/in-order-to-form/

-- The art and technique printing with movable type

-- The arrangement and appearance of printed matter

In English speaking countries, many writers and printers argued against this practice and the use of heavy capitalization fell from favor.

The Grammarphobia Blog: The rise and fall of capital letters. (n.d.) Retrieved August 3, 2016 from Grammarphobia https://www.grammarphobia.com/blog/2014/10/capital-letters.html

In Eighteenth century writing two different forms of the letter "s" appear in both printed and handwritten works. The regular "s" which is still used today and the "long S."

Printers would sometimes make decisions on which s to use based on what they had in their type drawer or simply on personal preference. It's not unusual to see the same document printed in different ways. 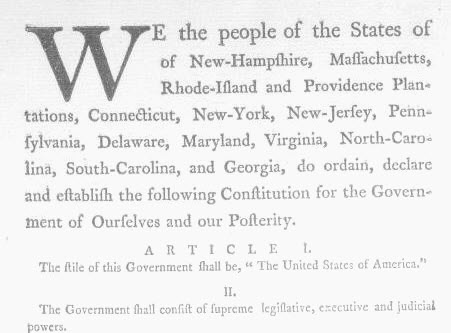