Use QuickFacts to easily locate a population and economic profile for nation, states, counties, and places.

All ACS data are survey estimates. To help you interpret the reliability of the estimate, the Census Bureau publishes a margin of error (MOE) for every ACS estimate. 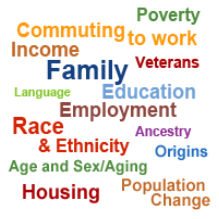 The American Community Survey (ACS) is a nationwide survey conducted on an ongoing basis to collect data about the nation, states, counties, and places. The data are released in single-year, 5-year, and 3-year time periods.

The ACS estimates replaces information formerly gathered in the decennial census; data on the "Short form"/sample.

ACS estimates are time periods not a point in time.

Do: express data in time periods

Do: compare data from non-overlapping periods

Don't: refer to data as a year (use the time period)