The 1790 Census volumes are available in print. 1790 is the only census where the “Schedules” were transcribed and printed. (Schedules are the sheets filled out by the census taker and have the names and information about persons). An alternate title for the volumes is: Heads of Families at the First Census of the United States Taken in the Year 1790. Note: there is no volume for Delaware. The schedules for Delaware were lost in a fire.

Heads of Families. First Census of the United States: 1790. The State of Pennsylvania.

The arrangement of the names is by county and then by town or census district. There is a name index in the back of the volume. The listing for Jacob Riehl is on page 205. 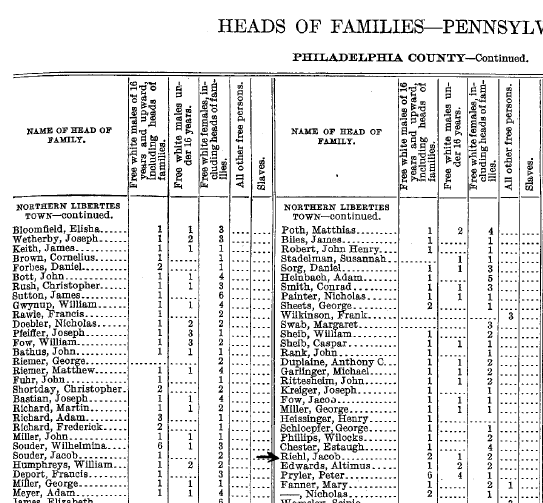 On the database opening page, select U.S. Census collection and then 1790. You can search by name or browse by location.

Blank census forms are available to help in interpretation of the data and in recording the information on individuals. Forms are available within the Ancestry Library Edition database and from several websites. See U.S. Census: Printable Charts and Forms (Cyndi’s List)